Is solar right for your home? 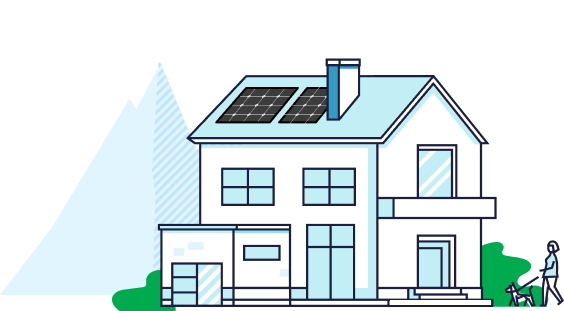 Texas is one of the nation’s leaders in solar power generation, in part because of the decreasing cost of solar panels in Texas and the rise of homeowners who choose to install residential solar systems for their home.

There are many benefits to installing a solar panel system for your home or RV, including significant savings on your electricity bill and creating a positive environmental impact. Here is a walkthrough of everything you need to know about solar panels in Texas, from the cost of a solar system to how to find the right solar installation company.

The cost of a solar system can depend on a variety of factors, including size, configuration, installation, and local costs like permitting fees. The cost of Texas solar panels is normally measured in dollars per watt, with the average residential solar system being about $3 – $5 per watt.

The upfront cost to buy solar panels in Texas is high, but that price tag has come down in recent years. In the past 10 years, solar panel prices have decreased by more than 70 percent. Homeowners can also opt for different financing options or solar leases if the upfront cost is too high. If you choose to buy a Texas solar system for your home, the average payback period ranges from 6 to 9 years.

The federal government and many state governments offer programs to encourage green energy investments like solar panels. These policies, including several in Texas, can help to offset the upfront expense of buying a solar system.

First, homeowners who install solar panels on their primary or secondary residence can claim a 26 percent federal tax credit for systems installed in 2021 and 2022. There’s no cap on the amount you can claim, so the larger your solar system, the more you can claim with the federal tax credit. Keep in mind that this tax credit only applies if you’ve purchased or financed your solar system. It doesn’t apply to solar leases or solar PPAs.

There are also Texas solar incentives that homeowners and businesses can opt into to lower the cost of solar panels. The state of Texas exempts residents who buy a solar system from any increases to their property value. There are also several utilities and local governments have implemented their own incentives:

There are several excellent reasons to invest in solar power. Consumers most often list lower energy costs, energy independence, and lowering the environmental footprint of their home as their primary reasons.

One of the biggest selling points of solar power is that you can significantly reduce your monthly energy bills. With solar panels installed, your home’s electricity will be powered by the solar energy that your system generates. Based on the traditional average Texas electric rate and bill, Texas residents who purchase a solar system for their home could save more than $960 each year in energy costs.

There are other financial benefits, too. Installing a solar system can also increase the value of your home. A study by Lawrence Berkeley National Laboratory found that a solar system increases the resale value of a home by an average of $15,000. Depending on the cost of your system, that alone might be enough to make back your initial investment, not even factoring in the amount you saved on your electricity bills.

By installing a solar system for your home, you can reduce – or in some cases eliminate – your dependence on the electricity grid. Some homeowners find that they are able to live completely separate from the grid using their solar system. And during times of high demand on the grid, you will be less subject to higher energy rates. These benefits apply to both homeowners and business owners. It’s important to note that most homeowners who buy solar panels remain connected to the grid so they can draw from the power grid at night or during cloudy days. However, they are significantly less reliant on the power grid and their energy bills are much lower.

Another substantial benefit of solar energy — not only to homeowners but to society as a whole — is that it reduces your carbon footprint and helps to do a small part toward fighting climate change. Using the traditional electricity grid creates greenhouse gas emissions such as carbon dioxide. By switching to solar power, you are helping to reduce your home’s environmental footprint by using green energy while also reducing your electricity costs.

Should I buy or lease my solar panels?

When it comes to installing solar panels on your property, there are a few different options. First, you can either buy the system upfront or finance it over time through a solar panel company. But you also have the opportunity to enroll in a solar lease. It can be tempting to lease solar panels to reduce upfront costs and avoid potentially costly repairs.

But there are some drawbacks to leasing that homeowners should consider. First, when you make lease payments, there’s no way to recover that cost. You don’t have the option of reselling your system to get some of your money back. Leasing a system also means you won’t permanently increase the resale value of your home. And if you move before your lease is over, you’ll need to find homeowners who are willing to take on your lease payments.

Another downside is that you aren’t eligible for the federal solar tax credit. At this time, the federal government’s 26% tax credit is only available to homeowners and businesses that have purchased or financed their systems. Overall, homeowners who buy their solar panels will see greater savings in the long run than those who lease.

There’s a lot to consider when it comes to installing a solar power system on your property. There’s no doubt that it’s a significant investment, and you want to do your due diligence upfront. Factors to consider include:

There are many available solar panel companies in Texas that can install solar panels for your home. Even better, many Texas solar installers can customize a solar panel system for your home to ensure it meets your energy needs. If you’re ready to invest in solar panels in Texas, make sure to research the installers in your area before signing a contract. In the meantime, SaveOnEnergy is here with guides and resources to help you navigate the solar industry.

Texas is a national leader in renewable energy. Solar energy has grown rapidly in the state over the past decade, and the state currently ranks second nationwide for solar power generation behind only California and produces more than 10% of the nation’s total solar power.

Texas began investing in solar energy in 1981 when the state created a Renewable Energy Systems Property Tax Exemption, allowing individuals and businesses to save money by having solar or wind-powered energy devices installed.

Because solar energy and wind power are so prominent in Texas, every traditional electricity plan in the state includes a percentage of renewable energy in the mix. If you are enrolled in a traditional energy plan, check your electricity facts label (EFL) to find the exact amount.