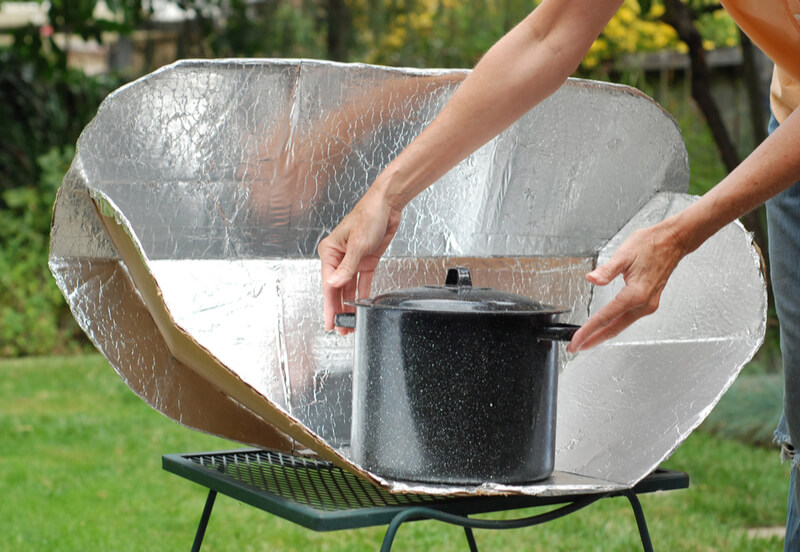 Solar energy isn’t limited to home lighting anymore. Today, the sun can power nearly any device that would otherwise consume electricity, from phone chargers to refrigerators and even air conditioning units. But one solar appliance in particular can reduce power plant pollution and contribute to communities around the world – all while serving up snacks.

As its name suggests, the solar oven harnesses sunlight to sustainably cook food and boil water. If you’re living life “off the grid,” solar ovens offer significant energy savings, without sacrifice … as long as you aren’t opposed to an outdoor kitchen.

However, the impact of the solar oven transcends this niche market of eco-conscious consumers. In rural countries where electricity isn’t easily accessible, solar cooking provides a practical and healthy alternative to burning organic compounds that release toxic smoke.

How does a solar oven work?

Instead of converting solar energy to electricity, solar ovens trap light particles, called photons, to generate heat. With the help of metal reflectors, which are positioned around the oven to maximize light input, photons pass through the oven’s transparent glass top and strike the interior of the insulated box.

For best results, a dark, metal pot is placed at the center of the oven, where it can absorb the incoming photons. Once the cooking pot becomes warmer than the surrounding air, the heat attempts to escape to a cooler space. However, since it cannot break through the glass barrier, it remains trapped inside. As heat is reflected back to the metal pot, the oven’s temperature rises rapidly – up to a scorching 400 degrees Fahrenheit.

If you’ve ever left your car outside for a few hours on a sunny summer day, you’re already familiar with this phenomenon, formally known as the greenhouse effect. Sunlight enters your vehicle through the windows, heating up the seats and, before long, the entire interior.

Solar ovens operate in the same way, but these compact insulators allow you to cook in a proper pan instead of on your car’s dash.

A bright future for solar power

Although it may not be realistic to swap your high-octane electric oven for a solar cooker, you can reduce your home’s environmental impact with these simple energy saving adjustments.

As we discover new applications for solar power, we look forward to a future where this eco-friendly fuel source improves the state of the planet and the quality of our lives.